Hello and welcome back to the second annual List-cember!

In case you missed it last year, I dedicated my December to posts centered around lists. Some were Christmas themed, some weren’t, some will be returning for a second edition this year, some won’t. Regardless, I’m excited to bring you the second installment! I hope you enjoy and I hope you give me opinions on things you’d include if you wrote one of these lists. I’m all about the input, people, give it to me!

I’ve really only seen this movie a handful of times, but it’s one of those that I constantly forget how funny it is until I watch it again. It’s Chevy Chase in his prime and it’s one of my dad’s favorite movies, which makes it that much better.

9) The Year Without a Santa Clause

This is a classic from the 70s where Santa wakes up with a cold after Thanksgiving and decides not to deliver presents that Christmas. Instead he sends out two of his elves to figure out if anyone still cares about Christmas or even believes in Santa anymore. I realize that the way I’m describing it makes it sound totally depressing but it’s not. (At least not all of it.) It’s got cute characters and catchy songs that I’ve been singing my entire life, so if you haven’t seen this one, I highly recommend you check it out!

This is another classic that’s undeniably adorable. We all know the story of Rudolph and how he saved the day—or rather, Christmas Eve night—but this gives us some backstory on the little guy, including his friendship with an elf named Hermey and his run in with the Abominable Snow Monster of the North (no relation to King of the North, Jon Snow.) Fun fact: There is a point in the movie when Rudolph yells, “I’m cuuuuuute!” and my family quotes this approximately 30 times a year.

7) To Grandmother’s House We Go

If you were anything like me as a kid, you were OBSESSED with the Olsen twins, so it’s really no surprise that the girls’ Christmas film holds a firm place in my top 10. In this story, the girls overhear their mom saying she needs a vacation, so they sneak onto a UPS truck in the hopes it will take them to their grandmother’s house. Mind you, the girls are only about six years old, so this causes some panic among multiple parties, but it’s undeniably cute and makes me smile every time.

I can already cross this one off my “to-watch” list this year because my roommates and I watched it while decorating our house the other day. It had actually been a few years since I watched it and I forgot how good Jim Carrey is in it.

This is one of those movies that always makes you think a little bit more about how lucky you are to have what you have, especially during the holiday season when the general mindset is focused what you want. I think it’s an important one to watch each year, if only to hear Jimmy Stewart yell, “MARRRYY.”

I take it back, this is probably my dad’s favorite Christmas movie. We’ve undoubtedly watched this movie upwards of 20 times in my life and we still laugh at all the same parts. Recently, I got a flat tire and I thought of the scene when Ralphie drops his infamous F-bomb, and while I’ve never had much of a dirty mouth, it still made me very grateful my mom rarely bought bars of soap. Fun fact: my family actually owns two bb-guns like the one shown in the movie and we break them out every Christmas to shoot old ornaments. Additional fun fact: no eyes have been shot out…so far.

I’ve been trying to stop myself from getting cheesy and saying I actually love this movie, but, well, anyways. I do love this movie and I watch it every year while I wrap presents. It makes me laugh, it makes me cry and it gives me all the warm fuzzies. Also, Hugh Grant’s dancing scene is one of my favorite things that’s ever happened in a movie.

At this point, it has to be almost impossible to make a Christmas movie that can hold up among the oldies, but Will Ferrell managed to do it a few years back—woah, I just googled it, and this actually came out 14 years ago, yikes—and I think it will forever be regarded as one of the best Christmas movies ever made. 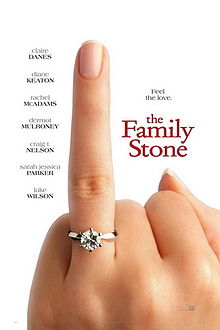 I know, I know, this one has got to be a little bit of a surprise for most people. As far as I know, my family is the only one that consistently watches this EVERY year, sometimes more than once during the Christmas season alone. But it is undeniably my favorite Christmas movie and probably one of my favorite movies of all time. I don’t even know what it is about it, maybe it’s just the place it holds in my family’s heart. But we laugh and laugh and cry and cry every year as if we’ve never seen it before and I wouldn’t have it any other way.