So there we were, boarding a plane in Ireland. It would be a short flight. Like, 10 hours shorter than our flight to Ireland and I was determined to soak in every minute.

So naturally, I fell asleep.

When I woke up, we were in London.

My mom, sister and I had been to London before, but it was over 10 years ago and the only thing I remember is hiding in a red phone booth from the wind, and the time we all got separated on the tube and thought maybe we’d just be lost in London forever.

So while we weren’t a wealth of information on the city and its history, we did know how to handle the tube. We knew to move quickly and mind the gap, and we brought that wisdom to our group of nine as we boarded at Heathrow Airport.

For my dad and Uncle Bruce, the tube, while slightly overwhelming at first, was a welcome change to the high anxiety driving they’d been doing for the last five days. So when I showed them a screenshot of the directions to our hotel via maps and they realized they just had to sit back and relax, I think I visibly saw three or so years added back on to their life.

Once we made it to our hotel, we checked our bags into the luggage room (because that is apparently a thing in hotels that I am just finding out about now?) and then headed to Nando’s.

If you are unfamiliar with Nando’s, it’s a South African restaurant chain (popular basically everywhere except the US) that specializes in Peri-Peri chicken. When we walked in, our waiter told us to pick our chicken, pick our spice level and pick our sides. Most of our group chose the Lemon & Herb spice level (I went with plain because #babytastebuds) and then our side selections included garlic bread, fries, roasted veggies and corn on the cob. It was all delicious and I miss it already. Unfortunately for my fellow US dwellers, as of now you can only find Nando’s in Chicago and DC. #nandNO.

Being a group on foot now, after finishing our lunch, we again pulled out our phones for directions, this time to some nearby landmarks. We were prepared to walk off our lunch—if only to earn an even bigger and better dinner.

Our first stop was Hyde Park. 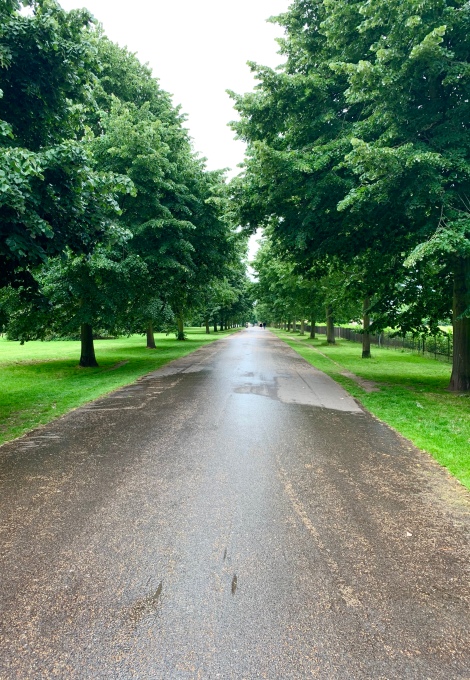 Having spent the last five days in Ireland, our awe-tolerance had gone up. We weren’t going to be impressed with just anything. But as we walked into Hyde Park, we couldn’t help but “wow” and “okay, beautiful” and “oh my gosh” our way through the expansive green gardens and scenic pathways.

At one point a man ran by us, seemingly on a casual afternoon run, and I audibly gasped, thinking, he gets to run through THIS every day? An average run for me consists of a high school, a Subway, and that one house with a really great tree.

Nevertheless, we made our way through Hyde Park, stopping in at Kensington Palace, the Wellington Arch and Royal Albert Hall to take all the touristy pictures and make all the touristy comments. I apologize to anyone and everyone who might have overheard our terrible British accents. We were just trying to sound classy and charming and less, you know, DUDE than we do back home.

(Which you can tell we are nailing in this photo)

Our ultimate destination of the day was Buckingham Palace, which we almost immediately started referring to as “the Buck.” I can’t tell you why, because I honestly don’t remember which one of us started saying it first. But I like to think it was our way of making the prospect of seeing such an iconic building more casual.

Once we’d thoroughly exhausted our cameras in front of the Buck, we all suddenly became very aware at how tired we were. Unbeknownst to us and our touring ways, we’d walked a total of almost six miles and were desperately in need of a nap.

So, we hopped back on the tube, officially checked into our hotel, and promptly crashed for about an hour.

Right around 7:00 p.m., we headed out in search of food and landed at Phoenix, where the food was delicious (I highly recommend the Chickpea burger!) and our drinks were even better (if you’re into sweet drinks, try a Strawberry Woo Woo—trust me.)

When planning our trip to Ireland, I spent a lot of time booking things in advanced. But when it came to London, our group decided to play a lot of things by ear. So as we ate breakfast at our hotel Wednesday morning, I was Googling possible plans for our day in between bites of a croissant and sips of a mimosa.

“Okay,” I said, holding my phone up to our group like it was a tri-fold presentation in a high school science class. “Picture this.”

I then took them on a hypothetical journey of our possible day, complete with dramatic hand motions and an aptly timed announcer voice. When I received an overall enthusiastic nod of approval, we all stood up, got in a circle and did a youth soccer hands in! cheer to send us off.

Okay, so we didn’t do that last part, but honestly, we should have.

Being tube regulars now (or, you know three timers) we walked to our nearby station as casually as if it were the frozen yogurt place down the street from our house.

“Where are we headed first?” my dad asked.

The department store giant that is Harrods was something that I’d only ever heard about and never thought I’d actually see. But now, having been there and spent a hefty amount of time walking around/getting lost inside the seemingly endless collection of shops, I understand why it’s a “you have to see it to believe it” type of places.

There was whiskey literally more expensive than my entire livelihood. There was champagne that shot confetti when you opened it. There were jackets and scarves and gloves so soft that I almost got emotional. But perhaps the most fascinating thing we found among the twists and turning of the Harrods hallways were these displays that allowed you to squeeze a rubber handle you might find on a perfume bottle and lower your nose to the mouth of what looked like a trumpet so you could smell whatever was displayed under the glass dome. My favorite was “leather glove.” 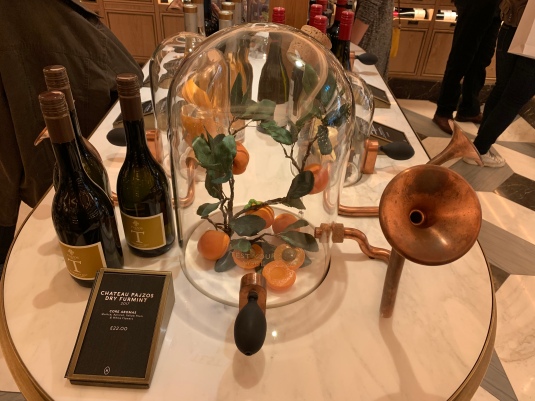 From Harrods we took the tube to Piccadilly Circus, which is like the London equivalent of Times Square. People moved in seemingly every direction and cars and double decker buses drove in what I can only describe as complete chaos. We stared up at tall marquees and listened to a street performer sing Ed Sheeran and trick naïve tourists into thinking that Beyoncé was arriving shortly to perform “Perfect” alongside him.

For lunch we ate at St. James Tavern, and then we got back on the move, navigating our way through the misty London day to Westminster Abbey. On our way there, as we were passing through Parliament Square, we noticed a long line of taxis, none of which were moving. Then, when the man in the first taxi started to move, every single taxi to follow began honking. Turns out, there was a full-blown taxi protest happening in front of Parliament. We would later learn (from our own taxi driver) it was in response to the rise of Uber and the damage it was doing to their business, and while I can’t make any comments on this since I don’t really have the grounds to, I can say that the protest itself was pretty badass. 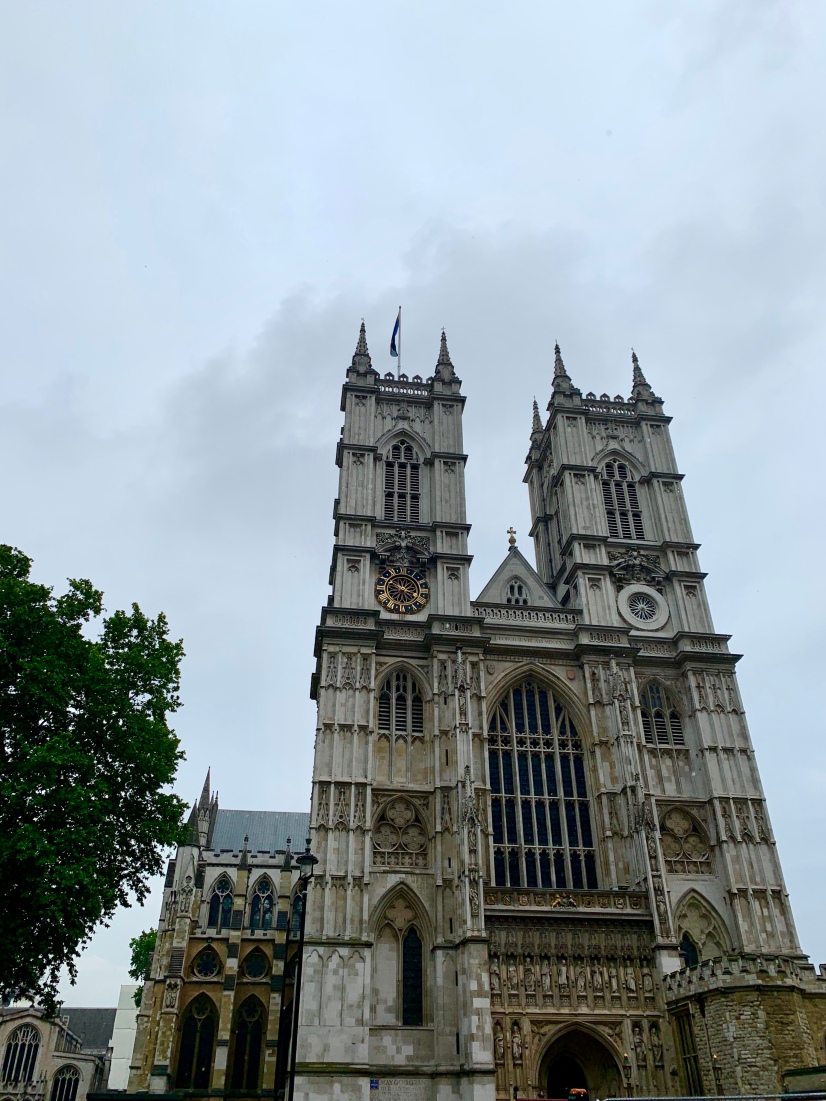 For our last site of the day, we got off the tube at Tower Hill to see the Tower Bridge and the Tower of London. We also had plans of seeing the Crown Jewels, but discovered the exhibit had closed a mere 15 minutes before we arrived. By that time however, nothing could get us down, because the sun had come out and was glistening off the River Thames, making our afternoon in the city absolutely beautiful.

That night, we walked to Santorini—the Greek restaurant near our hotel, not the city 2,000 miles away—and if there was ever a time to say I miss a specific food, I can truly and honestly say I will dream about their fried feta rolls for the rest of my life. Cue that middle graduation song that makes everyone cry. 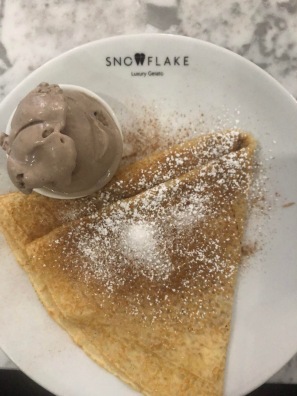 Knowing it was our last night in London, we decided to go HARD…

…so we went back to the same gelato place because #saltedcaramelforever.

We then finished the night with a few drinks at the Beachcomber. And as we made our final walk back to our hotel, I was happy to commit all of the sites and sounds from the last two days to memory. In fact, as I glanced up and down the streets of what had become our temporary neighborhood, I imagined what it would be like to call this place home.

It’s a weird feeling to imagine yourself living and growing in a different city, different country, different continent than your own, but there’s something about falling in love with a new place that makes you think it might be possible. That’s not to say I got home and repacked my bags or start international job-hunting, but it was a good reminder of just how big our world is. There is so much to see, to learn and to experience. And in those new discoveries we find new pieces of ourselves. So should you ever get the chance to travel, be it one hour from your house or thousands of miles, go. See more. Do more. And learn. Always learn. 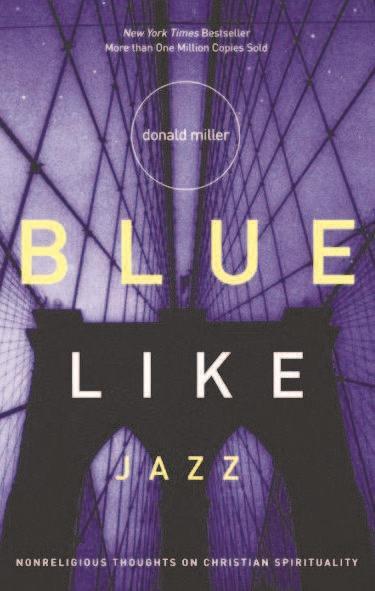