While scrolling around the black hole of YouTube, I found a series from both WIRED and Glamour that asks celebrities to answer questions based on the “last ____ on their phone.” It’s an alternative interview to give actors and actresses that are on press tours for whatever new movie/television show/etc. they are starring in.

For the average YouTube consumer, these may be relatively boring interviews, but for whatever reason I can’t get enough of them. I like to think it gives me a more realistic picture of the person being interviewed and provides them with a new set of questions to answer rather than the same old spiel they’ve been toting around. I’m also just plan nosey, so there’s that.

The other night, I was sitting at the table with my roommates and I decided we should answer the same set of questions, just to see what we came up with. Here were the results:

1) What is the last photo you took?

Rachel: This is the last photo I personally took rather than screenshotted, and it’s pretty great. It’s from just outside a dive bar right near Dodger Stadium and I just thought I needed to…well look:

Natalee: I have this one of the two of us (meaning her and I) celebrating [our friend] Nicollette’s birthday this past weekend.

Me: Mine was also from Nicollette’s birthday, but it’s of this cool window. 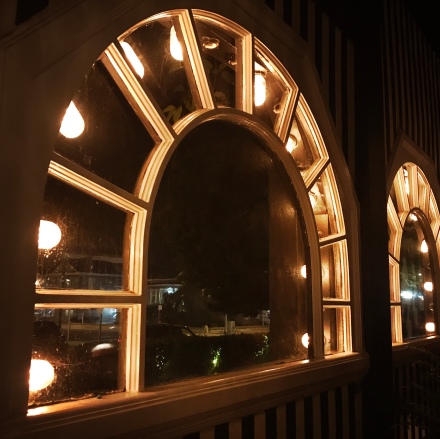 (Note: if you’re ever in the Ventura area, check out The Tavern. It’s a really cool bar made up of a series of different rooms/outside areas, one of which is a speakeasy type room where I took this photo, right before we started dancing to swing music.)

2) What is the last thing you Googled?

Natalee: “Paprika spinners chips.” Rachel and I were talking about types of Cheetos and then I found these and I wanted to order them on Amazon but they aren’t on Amazon so I Googled them and it turns out they’re only sold in the Netherlands. So…

Rachel: I have two that I made right around the same time. First is Natalie Imbruglia who sings “Torn”, that song that came out when we were kids. And then the other is Heaven’s Gate, a cult I was recently researching. I’m big into cults right now.

Kim: I was trying to look up which skateboarding competitions Shaun White was going to be in to see if we could go watch any.

Rachel: I mean, technically my last one is just, “oh yeah.”

Natalee: I sent one to our roomie group message asking Rach what kind of ice cream/donuts/Hot Cheetos we should get on our snack run.

Kim: Yeah the last one I sent was in response to Rachel’s response to that, which is this Bitmoji of me casually skateboarding with a raccoon.

4) How many alarms do you have set?

Me: I don’t think I have very many. Nope, just four. One for work, one for church, one for naps, and one to take my pill at night.

Natalee: I must have some kind of record. I have 15 different alarms and they range from 3:55 a.m. to 6:00 p.m. They’re not all set at once, some are set for just Wednesdays, some Tuesdays and Sundays, some just for Saturday, you know? My favorite one is for 7:01 a.m. because I’m usually supposed to be up by 7 o’clock for work and that one extra minute makes me feel like I’m being risky.

5) What are your most frequently used emojis?

Rachel: My phone says these:

But if I were going to go with my most frequent I would definitely say this one:

I’m not sure why it’s not in the top ones, though. Actually, now that I look at it, I have a train on my frequently used that I’ve definitely never used before. I also have a motorcycle and a gondola? I don’t even know where these came from.

Natalee: Mine also seem kind of messed up, so I’m just going to give you the ones I know I use the most:

Me: I think mine are pretty accurate:

6) What is your last voicemail?

Me: Mine is from my dad. It’s from a couple of weeks ago when my car started making this bad grinding noise and I called him to come check what it was. We decided to take it to the shop the next morning but he followed me home just in case and then left a voicemail telling me that in following me it didn’t appear as though my car was going to blow up before morning. So that was nice to hear.

Natalee: Mine is from some random company saying that it’s “very important” that they speak with me, I didn’t call them back.

Rachel: Mine is from CVS and they’re practically threatening me to pick up a prescription I don’t even want.

7) What is the last selfie you took?

Me: Mine is with our sunflowers that I took for one of the Plant Aunt videos. (For those of you who don’t follow me on Instagram, I’ve recently been documenting the growth of the sunflowers we planted in the backyard. It’s essentially me rambling/trying to stay involved because Natalee does all the work in watering them. Also, I’m pretty sure the neighbors think I’m crazy.)

Natalee: Mine is too! I had a full on sunflower photo shoot the other day.

Rachel: Oh no. You guys…

8) What is the last app you downloaded?

Natalee: Ballpark. It was from when I was at the Dodger game getting to sit in the fancy seats for a day and this app let you order beer to be delivered to you!

Rachel: Mine is probably Game Time, that app that lets you download tickets on the day of a concert or sporting event.

Me: I don’t know which one was last. It was either Runtastic, which is a running app that is partnered with Run for the Oceans, or The ASL App which I got because I want to learn sign language, but I haven’t opened that one yet.

9) What is the last podcast you listened to?

Natalee: Mine is boring, it’s just work notes that I typed up and then sent in an email.

Me: Five minutes ago, when you guys were discussing your opinions on Cheetos, that’s a blog post waiting to happen. (Natalee picked up a few different bags of Hot Cheetos during our aforementioned snack run and then she and Rachel sat at the table and had a very professional opinion on which Hot Cheeto flavor reigns supreme, stay tuned for those results.)

Rachel: It’s notes for a calendar that I’m working on full of daily quotes that sound like they should be inspirational, but they really aren’t… (Also stay tuned for this, y’all, it sounds hilarious.)

All in all, I’d say it was both an educational and overall enjoyable experience. It’s interesting to check in on where you’re at with your phone, especially since we spend so many mindless hours staring at it. Plus, it’s always fun to be a little nosey.