So it was 9:14 pm on a Friday and we’d just arrived in Portland, Oregon. It had been a long (fun, beautiful, delirious, 14 ½ hour) drive and we wanted nothing more than sleep.

Why were we here? Pancakes.

If you read any of my posts about my trip to Hawaii last summer (especially this one), you’ll know that in our time there, my family and I came across a restaurant named Slappy Cakes, which is like the Korean BBQ of breakfast. You choose the batter, the fillings and the toppings, and then you cook them in various creative shapes on the griddle installed in your table. A few weeks after we returned home, I found the T-shirt I’d purchased while we were there and decided to Google the chain to see if there was a closer location. Turns out, the only two locations in the United States are Maui, Hawaii, and, you guessed it, Portland, Oregon.

Sure, it was a crazy plan, driving 1000 miles for breakfast, but when it came down to it, it was a trip I couldn’t resist, and luckily, I convinced two other suckers to take it with me.

When we arrived at our hotel, we all agreed we needed sleep, and lots of it. So, we set our alarm for 9:30, and all died beautiful, instant, fluffy pillowed deaths.

10 1/2 hours later we were up, and we were starving. But upon arriving at Slappy Cakes, we were quick to discover that it was not unknown to the people of Portland. There was a line out the door, and the wait time was around an hour. It went quick though. After some walking around, trying our best not to look touristy (though our pointing and aweing did little to make that case) we received a text message that our table was ready, and we all rejoiced.

Once seated we decided that, since we’d come all this way, we might as well go all out on our order. Thus we opted for three different types of batter (buttermilk, chocolate, and peanut butter), six toppings (chocolate chips, white chocolate chips, blueberries, strawberries, bananas and whipped cream), and an order of breakfast potatoes. Here is our attempt at commemorative pancake art  (with some assist from Snapchat): 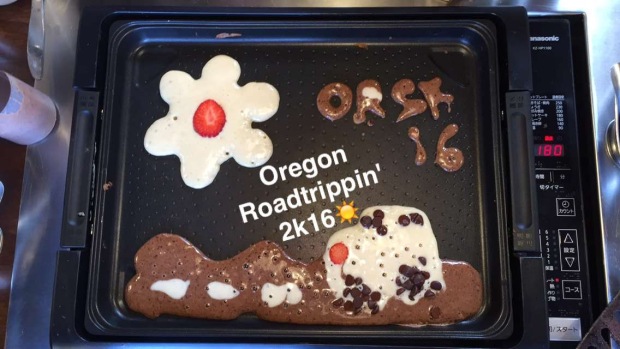 Once we were back in the car—and 10 pounds heavier no doubt—we all kind of paused.

In the midst of the long drive and pancake elation, we’d done little in the way of planning what to do with the rest of our day. So, like any smart-phoned humans of the 21st century, we asked the Internet.

Things to do in Portland?

And with a few key sites jotted down we set off, hopeful to see as much as we could, but completely uninhibited by plans or time schedules. We were going to window shop Portland, stopping anywhere and everywhere we felt like and this is what we found:

A home consisting of 46 rooms that was originally built in 1909 for Henry Pittock and his wife, this was by far the highest rated attraction in Portland. People Yelped their hearts out for old Henry. And after taking the $10 tour of the grounds, it was not hard to understand why. 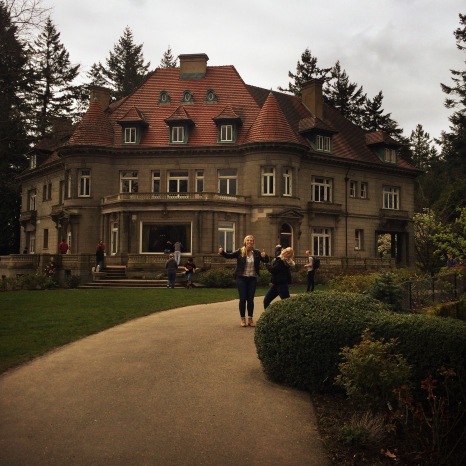 This was an accidental find provoked by our seeing a green sign with an animation of water on it. (I’m serious) It was a, “Let’s see where these arrows lead” type of thing. And lucky for us, the arrows led us to one of the most beautiful views we would come across. 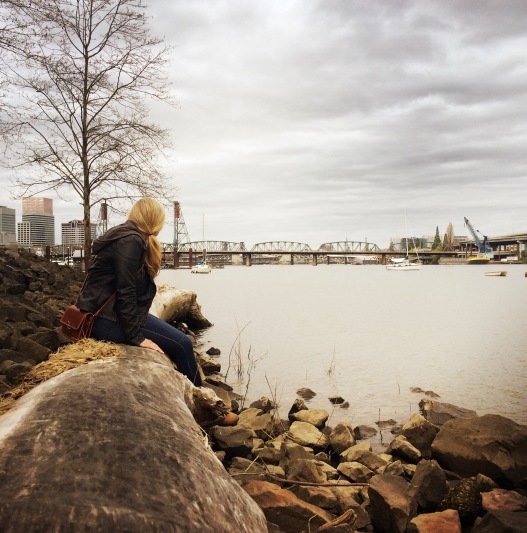 This was another point and find. While we were admiring the miraculously clear sky, we saw a pod floating above us, headed into the face of a mountain. I mean, how do you not seek that out? Better yet, how can you pass up a $4 ride that gets you a view like this: 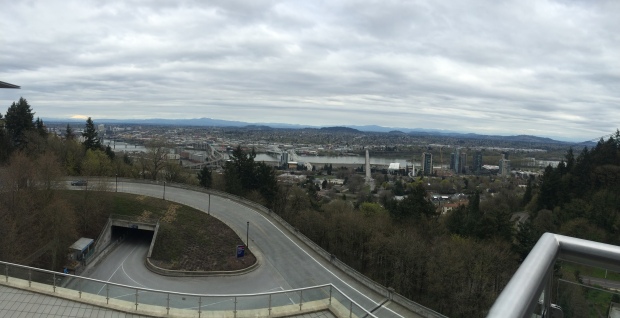 While oohing and aweing at the city from OTTSU (the tram’s drop off point) I saw what appeared to be a group of red balloons and for no good reason, became obsessed with them. I could not go on without knowing what they were. So, after taking the tram back down, we finagled our way over to them, only to discover they happened to be at the entrance of this exquisite pedestrian bridge. And, going with the theme of the day, we said, “What the hell, let’s cross it.” 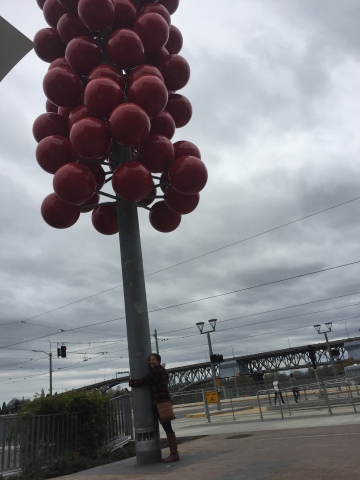 This is me finding my beloved “balloons” 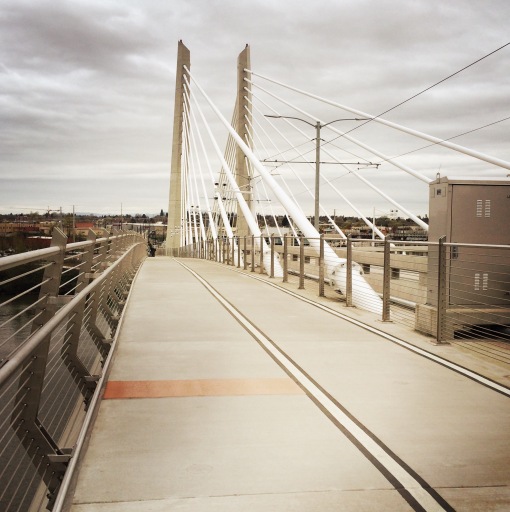 Across the bridge we found a few fun tidbits of Oregon history, including this submarine, which served in the Vietnam War. We didn’t get a chance to go inside, but it was a humbling reminder of how lucky we were to be living such a joyous, spontaneous day. 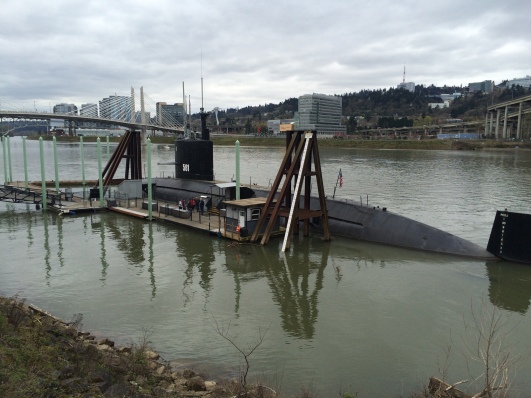 When you’ve been driving around all day and you’re hungry but not, you know, hungry hungry, a dainty cupcake shop is practically irresistible. Especially when the pastries are this adorable. 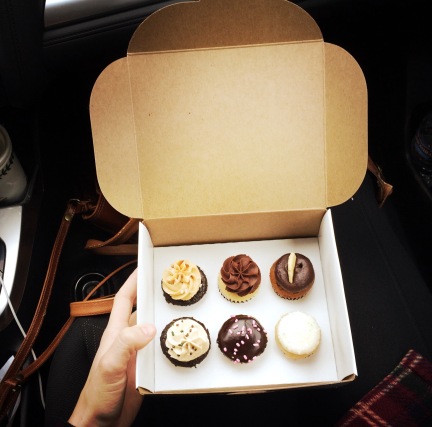 Besides Slappy Cakes, this was our only other must see destination going into our road trip. And in case you’re wondering, yes, we did hear about this place on The Bachelor, but the 5 minute slot on ABC did little to prepare us. For one thing, the place is HARD to find. We did about 5 trips around the block before we noticed its small, understated door. Also, the wait time was 2 hours, so we put our name in and gave the host our phone number before leaving to find something to eat.  We were warned however, that when he called we had 10 minutes to show up or they would move on to the next party. Harsh.

A few extra notes on MWL: The menu is practically as big as the Bible, which makes sense after you look at the literal wall of whiskeys to choose from. Also, the bartenders know EVERYTHING, including how to not shoot a dirty look at someone like me, who flips through the vast menu quickly, and then orders a beer. 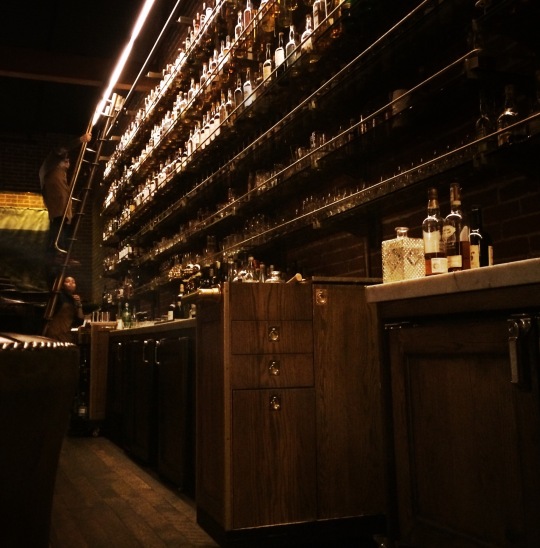 This was one of the highest rated eateries in Portland, thus making it our first choice after we put our name in at the whiskey library. We thought we’d just pop over for a quick bite, check another big name off the list, but, if you’ve ever been to Portland, you’ll know this was a hilarious thought. The wait time was 2 1/2 hours, so we politely smiled and moved on. (I’ll be back for you Pok Pok!)

Down the street from Pok Pok was a group of food trucks, a food truck gathering if you will, and we opted for the stylings of this sandwich truck. I got the Cuban, and long story short it was a beautifully crafted high five for my tongue.

This was another highly recommended, must try Portland local. And since we had a long drive back on Sunday*, it was the perfect way to start our morning. Just look at these masterpieces: 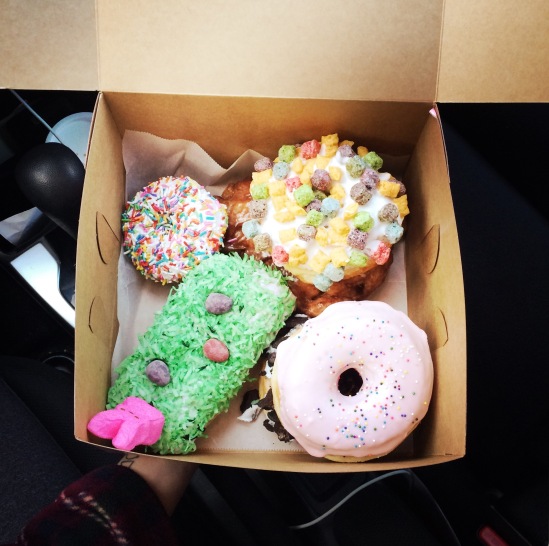 (*In case you’re keeping track, we woke up at 7:30 on Sunday, and since we woke up at 10:30 on Saturday, the whole “Seeing Portland in One Day” thing still stands. HA. If you weren’t keeping track, just take this note as further proof that I am an honest and trustworthy tour guide.)

This is located right across the street from Voodoo Doughnuts. That being said, there’s not much else to cover except that, 1) it’s awesome, and 2) you simply must take a picture in front of it, especially if it’s a little too early for your liking and you didn’t get a lot of sleep last night and you have a 14 ½ hour drive ahead of you. The weirder you already feel, the better the picture will turn out. Proof: 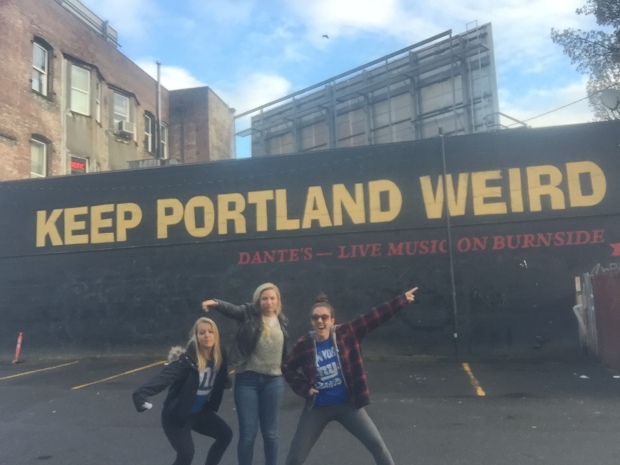 Overall, my review of Portland is 40 thumbs up. This may sound weird, as I am only one person with only two thumbs, but it deserves more than that. So just picture me and 18 other people sitting around talking, when suddenly Ryan Seacrest pops out and asks us what we think of Portland. Then picture Ryan agreeing with us, offering up his own thumbs and then signing off with, “Goodnight America, especially you Portland.”