Of all the goals I set for 2017, the one that most worried me—both in questioning my sanity for setting it, and questioning my ability to complete it—was to run 1000 miles.

As someone who has hated running for the majority of her life, it was definitely what you would call a wild card. Most people I told thought I was crazy and the rest thought I was actually insane. I would have been right there with them if I hadn’t climbed Mt. Whitney a few years ago and gotten a big ole’ taste of “I CAN.” That experience inspired me to run my first 5k, two 10k’s and three half marathons, and ultimately led me to setting this goal for this year.

So, with the BIFC door wide open, I laced up my shoes and went on my first run. It was only three miles, but it was hard and I had to stop multiple times to catch my breath. Fast forward 369 days and 226 runs later, I finished my 1000th mile, winded only from all the celebratory screams I made throughout the final five miles.

Now that I’m finished, I’ve had multiple people ask me how I did it. And while a truthful summary would be: “I have no idea,” I broke it down to a few key aids. So, in case you’re among the curious or perhaps inspired to try this goal yourself, here are seven things that helped me run 1000 miles:

I’ve kind of already said this, but it’s worth mentioning twice that to achieve a goal like this, you need to become slightly insane. You have to be willing to put yourself out of your comfort zone over and over and make sacrifices over and over. Over the course of this year, I ran on almost every surface: asphalt, grass, dirt and concrete; I ran indoors, outdoors, and sometimes a combination of both in one day; I ran early in the morning and late at night, wearing jackets in 40 degrees, wearing shorts in 90 degrees and wearing hoods and hats in the wind and rain. My schedule was dictated by running, whether it was an average workday, a weekend or even a vacation day, and I had absolutely no time to get sick. When I look back at it now, I want to laugh because I really was, by all accounts, crazy. But then again, I know if I hadn’t been, I wouldn’t have finished.

2) Listen to Those Around You

After the first few months of running, my friends and family started to realize that I was actually serious about this goal. As a result, it became a very popular topic of conversation. When we would get together, they would always check in on my progress. Near the end of the year, when I reached the 900 mile mark, I started posting Instagram videos to track my last 100 miles and a number of people messaged me with both encouragement and graciousness, saying that my quest for crazy was inspiring them. It was an important reminder of how my actions, even though they felt small and meaningless in the grand scheme of things, could not only affect but also inspire others. This was a huge motivating factor for me. I wanted to inspire them as much as I wanted to inspire myself.

3) Don’t Listen to Those Around You

Amongst all the encouragement, there was also a lot of implied doubt and protective paranoia. My friends and family didn’t want to see me fail. They didn’t want to find me at the end of the year burdened with discouragement. Not to mention, this year happened to be a very busy one for me, so there were many points when I found myself far behind the pace I needed to finish on time. At one point in August, I was almost 60 miles behind, which equates to almost 22 days off pace. “Are you—do you think you’ll be able to finish?” people would say. And while I knew it was rooted in genuine worry, there were parts of me that absorbed the negative connotations—They don’t think you can do it. You’re way too far behind. You should just quit—so I had to learn to block that out. Because in the end I was the one who knew if I could do it. I was the one who had to decide if I could make up the ground I had lost. I was the one who knew I wouldn’t and couldn’t quit.

Before I started this goal, I had this vision that once I made it through the first month I’d be in incredible shape and I’d never get winded or have leg cramps or feel like I was going to pass out—which is how I’ve felt for most of my running career. To my unfortunate surprise however, even in these last few months I still had days when I’d leave my house to run a route I’d run countless times before, only to find myself so short of breath I thought I might pass out. “HOW CAN THIS BE HAPPENING?!” I would think as I slowed myself to a walk. On these days I’d get so down on myself, and I’d wonder why I ever thought I could do something like this. But then I’d wake up the next day and feel so good on my run that I’d go two or three miles more than I intended. Thus, I had to learn that running will always be a learning curve, and I can’t let a few bad days get me down.

5) Expect Injuries and Work Through Them

I have never been someone you would consider “injury prone.” I’d like to say it’s because I’m lucky/indestructible, but the truth is, I’ve never really pushed my body to its limits before. And while I have a high tolerance for pain, I just wasn’t a “work through the pain” type of person. For this goal however, “if it hurts, stop” wasn’t really an option. I strained the Iliotibial Band in my left leg, I got shin splints in my left leg, I had two toes on my right foot split open, and I worked through sore muscles in seemingly every part of my body. And while every single one of these SUCKED, none of them took me out of the game. I iced when I needed to, I took days off when I needed to, and most importantly, I got right back out there.

Before the start of the year, I spent a lot of time formulating the perfect running playlist. I scrolled through my entire iTunes library and I did a good amount of Googling to find songs that would (ideally) make me forget how hard running is. A few months into the goal however, I was already sick of this playlist. And not only that, I was sick of the routes I was running. I was getting bored of the songs and the scenery, which made it exponentially harder to motivate myself to run. So, I spiced up my routes. I took turns I never made before, and ran familiar routes backwards. As for ear food, I started alternating in podcasts. It was a nice break from hearing the same songs over and over, and I was surprised how easy it was to get sucked into other people’s conversations. If you’re looking for suggestions, some of my favorite podcasts were: Serial, Happy Sad Confused and Modern Love. Also, during the summer, I spent an entire month on the treadmill, binge watching Prison Break, so if you’re an indoor runner looking for some eye candy, Wentworth Miller is there for you. As far as songs go, I made this playlist, aptly titled, “These Songs Helped Me Run 1000 Miles” which you are welcome to listen to whether you’re running 1000 miles, 1 mile, or are just needing some pumped up tunes to drive to.

As some of you may know already, I’m an avid spreadsheet maker. Thus, when the opportunity arose to track my running progress, I went all out. Here is a screen shot of my year of running, the yellow being days I went on a run, the blue being days I went on two runs—one outside in the early morning and one on the treadmill in the afternoon to try and work around the triple digit degree days in the summer. 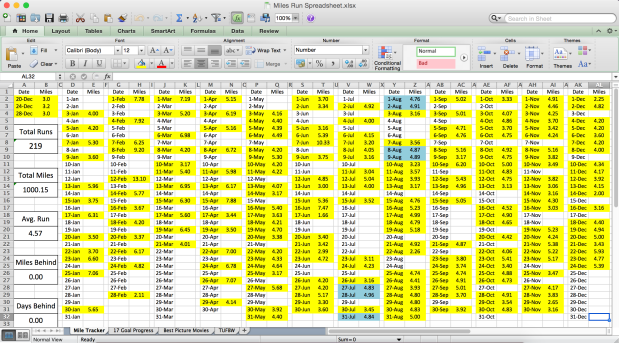 This spreadsheet proved to be both motivated and discouraging as it showed me both my progress and how far behind I was. In the end however, it gave me one less stress, as I never had to worry about losing track of where I was on this quest.

There are probably a bunch of other things that helped me, both big and small, some I might not even realize. For example, to everyone that ever asked me, “How’s your running going,” you are one of those things! As of now, I’m very proud of myself, and even more, I’m excited to see what the future holds. Inspiration and adrenaline are as addicting as they come, and now that I’ve unlocked another level of “I can” in myself, I’m already craving what’s next.

A mantra I gave myself this year was, “if it’s still only a daydream, the answer is no, but if you’re out there trying and failing, the answer is not yet.” I’ve wanted to be a runner for a long time, but until this year, was never able to break the barriers that surrounded that goal. Now I’m ready to see what else I’m capable of, and turn another “no” into a “not yet.”